It’s no secret, to those who know us, that Husband struggles with certain aspects of the English language. What is not so commonly acknowledged, however, is his flawless fluency in another: football. I mean, I’m not just talking conversational football here (you know, commonly used referee insults and how to order a cup of Bovril); I’m talking details, description, dialect. It always amazes me that no matter who he’s speaking to, where they’re from, or whether they support the most obscure smalltown club known to English man, Husband will carry the conversation like a native. “Oh Durmstrang? Haven’t they just signed Krum? What do you think of him?” (Ten points to anyone who speaks my other language, there.) Whilst he’s practised this ‘gift’ for some time, however, it’s only very recently that he began to use the language of football to describe a very different kind of sport: Vicaring.

You see, in just a few weeks we will begin the complicated process of discerning (*see jargon buster below) the next stage of Vicar training; and it’s not an easy one to explain. So, in an attempt to communicate the process more effectively, bust some more Anglican jargon and make these repeated explanations a little more fun (for him at least!), Husband came up with this…

The Church of England is split into what’s called diocese. We are going to call them clubs: 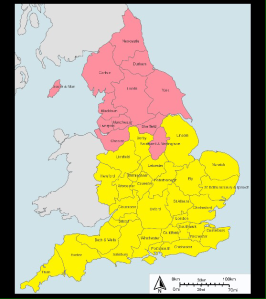 Each club has a Board of Directors and a Chairman, who gives the final say on all staff employed and all positions appointed.

Now, the club identifies and selects a future manager and sends them off to a specialist training ground to get their coaching badge. However, the demands of management are so high that they don’t throw them straight into the senior position (“no one wants to be an Alan Shearer now, do they?!“). Instead, the trainee is contracted to return to the club as an assistant manager, for three to four years. Once they’ve served as an assistant for at least three years, the new manager is then free to coach within the original club, or to move on to any other club, as they see fit. (So, Husband is currently one year away from receiving his badge, and has booked a meeting with the Board of Directors to determine which experienced manager he is going to be assisting next season.)

Still with me? Good! For that, dear supporters, was the simple version…

Here’s where it could get more complicated. So, let’s switch analogies slightly, and make the trainee Vicar the player…

Up-and-coming players are sponsored to train elsewhere, but are contracted to return to their home clubs to play for one of their teams. However, if the club doesn’t have a suitable position for the new player, they have the right to cancel their contract and offer them a free transfer to another club. Likewise, if the player doesn’t like the positions offered by their home club and feels they would be better suited to a different one, they too can request to cancel their contract and find another position elsewhere. In fitting with this picture, however, there is a transfer window: clubs must position or transfer all players by the 31st of October (an important date all round!). Any players left unaccounted for after this deadline become free agents, and compete for individual positions across the country. This can be exciting or terrifying, depending on your disposition!

So, let’s recap… In a couple of weeks Husband will meet with the Board at our sponsoring club, to discuss the kind of manager he should be assisting and the kind of team he should be coaching. However, if they have no positions appropriate to becoming the kind of manager he wants to be, or he’s not the kind the teams available are looking for, then he becomes a player and we switch illustrations. As it goes, however, we also happen to be huge fans of the club we came from (which is ironic if you know which football team Husband actually supports), and so we are really, truly hoping for the straightforward version.

(It’s also worth noting here that, while all of this is going on, these boardroom conversations are strictly confidential until contracts have been signed and all staff have been notified. Therefore, even the closest supporters are expected to be kept largely in the dark; and you certainly won’t see anything mentioned on Sky Sports News until long after it’s been decided. All in all, a pretty difficult challenge for a natural commentator like myself!)

So… Where’s the faith bit?!

Well, we started to put God into this particular analogy, but that sort of made Him akin to Sepp Blatter; which wasn’t a road either of us wanted to go down really! So, all I can attempt to communicate is that to us, God is the highest authority and the deepest passion; the beating heart still softly heard beneath the bureaucracy, corruption, scandal and marketing; the reason we still follow, despite the losses; the Spirit of the beautiful game. And us? Well, we’re still just diehard fans of the main event, at the end of the day.

Now, I’ll be the first to admit that Husband has his quirks; but a fetish for wearing this particular type of kit- dresses, dog collars and the like- aren’t among them. He genuinely feels that God has called him (see jargon buster) to train for this all-encompassing role.As for me, I believe and support him in it too; to the point where I actually feel a little bit ‘called’ myself (whoever thought I’d find my place amongst the WAGs, hey?!) What’s more, at the moment, we are both so excited about our ‘sponsoring club’ that we suspect there’s  probably an element of calling in that too. However, we’ll just have to watch this space (for a frustratingly long time, I imagine) to see about that one!

So… Think it’s all over?

Anglican: Anything “Church of England”. I consider myself a bit of an alien- an Anglicanalien, if you like- hence the reason for this dictionary…

Discern: To pray about something in particular, listen and interpret – from internal or external signs- the right thing to do in that situation.

Calling: The sense that God is prompting- through internal and external signs- the individual to serve Him in a particular role, time or place.

Diocese: The club, in our anology, as described and mapped. A bit like counties, but with different names and boundaries.

Bishop: The one in charge of a particular diocese (AKA The Chairman- or woman!).

DDO: Diocesan Director of Ordinands; helps the above with the selection and ordination process, (and would be on the Board of Directors).

Ordination : (The Coaching badge!) Trainees are ordained as Deacons upon graduating from college (AKA Vicar factory), and then ordained as Priests after a year of curacy.

Curate/ curacy: The term used for the graduate’s first post (AKA Assistant Manager)

In Husband’s analogy, individual churches are represented by teams. Just for future reference:the community in which the church is based is called a parish, while groups of parishes make up a deanery, and deaneries comprise a diocese.