I’m sat in the rocking chair with the youngest all snuggled up, snoring heavily into a blanket. Her brother and sister are playing upstairs; the tune of their laughter harmonising with the much fainter sound of worship music seeping from Husband’s office. All in all it seems to me the perfect soundtrack to a Sunday.

Behind me: absolute chaos. (No, really. If you don’t believe me, see for yourself!) 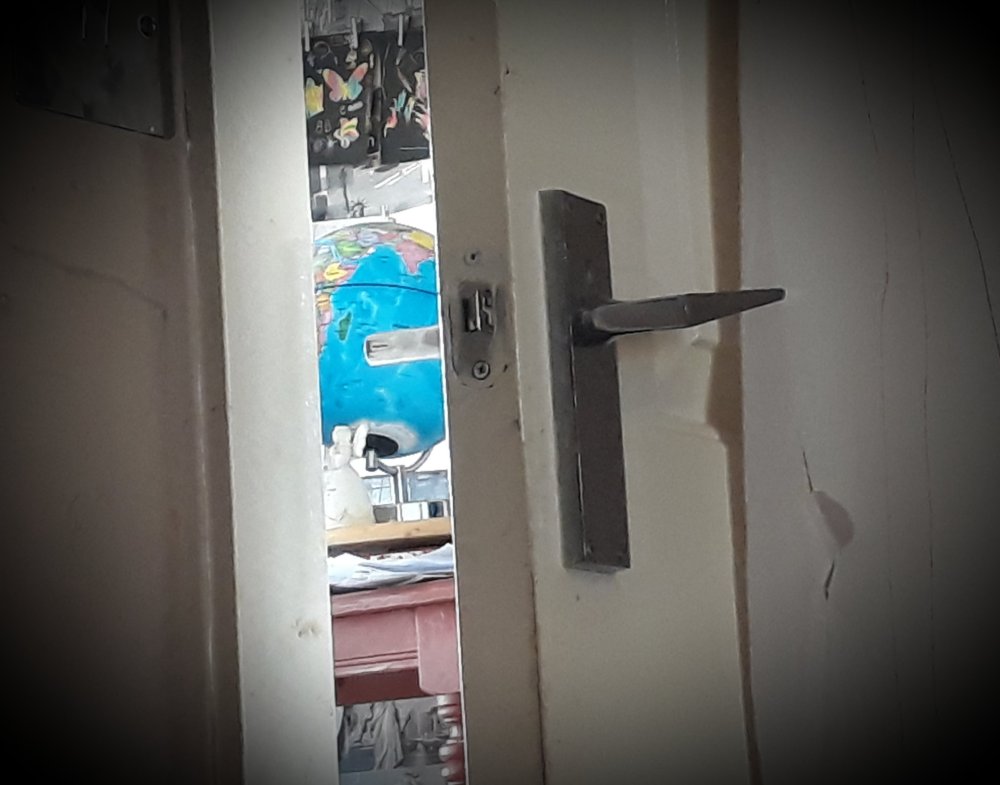 It’s ajar, and so presently it appears closed; though every now and then the wind from the open window blows it hard enough to reveal a glimpse of what’s beyond. Sometimes simply a slither of light, sometimes a little bit more. Either way, whether almost open or closed, I can hear the constant creak of the door.

It appears to me that this ever-creaking, vision-teasing door is exactly how I feel about writing. Except in my metaphor, the door isn’t right in front of me. Rather, at present, this hobby, gift or skill- call it what you will- stands rather flirtatiously ajar at the end of an extremely cluttered hallway. There’s something beyond it- I’m almost sure- if I could only reach it, touch it, push it… but there’s so much to do between here and there that I can only imagine things of it.

Lockdown has served to clear the clutter a little bit and presented more opportunities to write. In fact, the door has blown open so many times I’ve begun to wonder if the time to pursue it might be right?

See, a couple of weeks ago, I realised that I have now entered my fifth year as Stars in Clay Jars. I’ve written over 100 posts; (though most in the last few weeks!) Some phases of life, the words have poured out in a torrent; I can’t find peace until I thrash them out. Other phases, it seems I’ve had neither time, nor space, (nor inclination) to communicate at all. Nevertheless, the quiet creak has always been there. And so, these last few weeks, I decided to investigate the creek. To walk towards the teasing light; push the door a little bit more and peak around the other side.

First step? I decided to pay for my blog. (I know, right? I’m a Northerner! We dinnit pay for nowt we can get for free!) But… it felt like a worthy investment. (If only, for no other reason, than to stop the Viagra adverts from illustrating stories about my Husband!) It was a small step of faith if you like, alongside an earnest prayer; what do You want me to do with this? And where do we go from here?

Then, lo and behold, over the last week or so I received some genuinely moving responses to the words I was churning out. Private, personal messages of encouragement and resonance; “please keep writing”, “this is helpful”, “you describe exactly how I feel!” Honestly, you have no idea how much these messages mean; how reassuring it is to confirm that I’m not just writing for me!

And so, naturally, I began to believe that this was all confirmation; that I should pursue this gift with passion and drive- with extra acceleration! Thus, by midweek my head was full of stories. It may have been a short life thus far, but I do have so many to tell; of times when God was present and personal,with so much attention to detail. And then, almost like an iceberg tip, I recieved a notification. For the first time ever, a fellow blogger had given me an Award Nomination!

Well… that just proves it, right?!

Right… I admit that my head swelled for a good half an hour before I actually looked into the competition. To enter, you needed to read and comment and tag and answer and ask… and so it actually served as a realisation.

As lovely as it was to be included in the blogging community, (thank you Nabeeha Jameel- check out her lovely blog here!)… it turns out, with three kids at home and a Husband in ministry, I simply don’t have the capacity to entertain it. (Which I realise, in its authenticity, is exactly what this blog is about.) In fact, even attempting that one  extra little post outside of daily life almost made my head explode! And, though my past stories are worth telling some day, I have to admit… I’ve been utterly consumed by them this week. I mean, I started looking twice when I crossed the road as it seemed my life was  flashing slowly before my eyes! What’s ‘worse’, when I finally stopped reminiscing, I started imagining instead; fictional worlds unfolded and faceless characters followed me around the house into the night!

My friends, I have no idea where that door leads, but I know now… the timing is definitely NOT right!

And so, after an exciting start to a literary week, I found myself backing away slowly. Turns out, for now, that creaking door belongs at the end of the corridor. And as for me? I belong in that cluttered hallway. For that clutter is a stage of life in all it’s raw fullness and glory; it has light and shade, laughter and tears; but it is a heart-wrenchingly short story.

And I don’t want to miss a thing.

There’ll be plenty of time to open the door and explore the paths beyond; but for now all I offer is an insider report- where the years are short but the days are long. Yes, for now that slither of doorcrack light serves only to illuminate the mess; to spotlight clusters of intricate beauty or struggle; for me to highlight as I think I serve best.

As always, thank you for reading- and thanks even more for when you let me know too! I appreciate the encouragement more than you know- for perhaps one day, there’ll be something to pursue! 😉 God Bless xx