Ok, I’m going to keep this one brief as I forgot to type as I went (a little a day goes a long way!), but it has been a pretty good week for documenting life in a pandemic. (Not to mention its effects on Mental Health!)

Rain. Lots and lots of rain.

Husband worked half the day, so the rest of us just played board games and watched TV. Seemed like a whole lot of nothing on paper but the kids were really happy! Sometimes I think they just need a rest.

For weeks now I have been growing increasingly fed up of online Church. Even when we host it. (Especially when we host it actually… Parenting live on the internet? No fun!) The weeks when it’s not our turn, the kids barely engage, I’m reluctantly going through the motions and so some weeks I just don’t bother at all. I’d actually started to dread Sundays. Last week, however, when MIL was here, she spotted an old photograph of the kids sat in a tuff tray; an explosion of colour and texture everywhere.

“Oh … last year. I used to do Church at home with them when I couldn’t face taking them to the building. That one was Pentecost- they loved it.”

I realised with this trigger that the pandemic and the law had somehow given me an excuse to lament and mope about things that weren’t always that great to begin with. Yes, we miss our Church family. Yes, it’s turned our lifestyle upside down! Yes, right now I would give anything to be able to go and meet with fellow believers and send the kids to a group so we can all learn about God and worship in peace. But before all this… that kind of Sunday was alot rarer than I’m caring to remember!

What’s more, before all this, if I wasn’t happy with the way our Sabbath days were panning out, I did something about it. I took proactive steps to use my own gifts at home to cater to my own kids and the specific ways that they engage and learn. And it rarely involved a screen.

So that was it: my butt was kicked. I asked the kids on Sunday morning if they’d like to do “Bible Box” today instead? (The name we always used for DIY Church at home.) Honestly, their faces lit up. They were so genuinely excited it made my heart dance too.

We started a book which explores the Jewish names for God, the first of which was “Elohim”, the name used to describe God the Creator: “no one higher or greater.” We played through the story, did some drama, made some snacks and then got creative materials out for a free-for-all. Everyone was buzzing, me included, as The Boy asked:

“Can we do Church like this every week… or was this just a treat?” 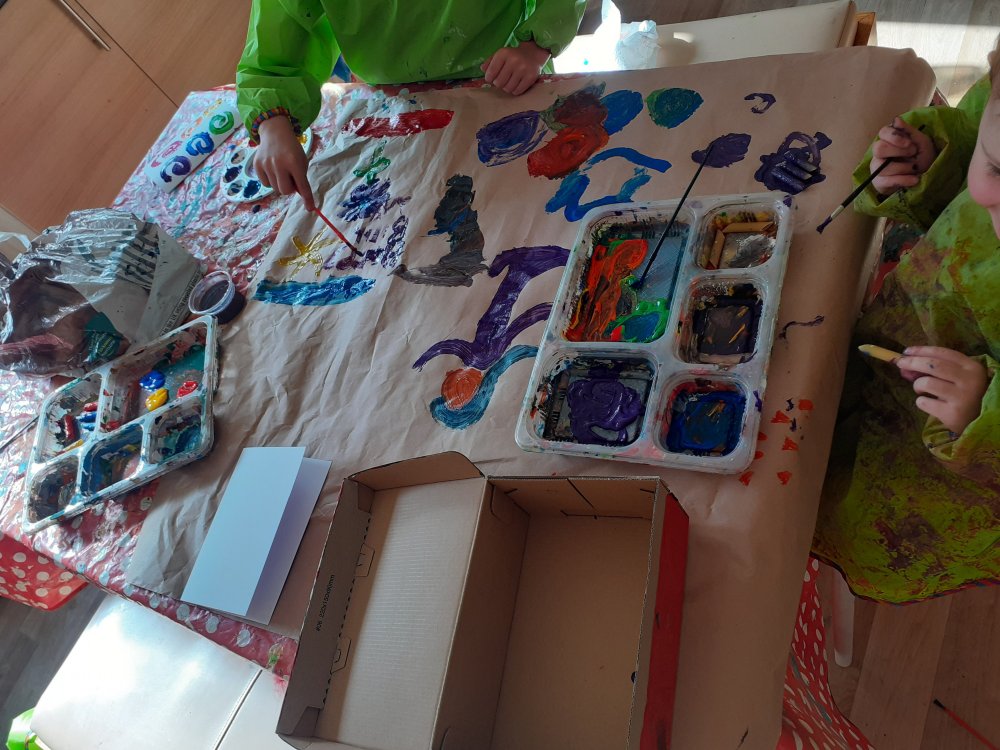 After lunch, we all got wellied-up ready for a family walk, (perks of living by a canal!) However, as we opened the door the sirens started. A police van arrived, followed by three more; followed by six fire trucks and about the same number of ambulances. Within fifteen minutes the entire street was full of emergency service vehicles; every neighbour was at their door and the canal was cordoned off. A couple of women ran down the street in hysterics and it quickly became apparent that this was not a scene for a small audience, (or any onlookers really). We retreated inside to distract the kids from the obvious commotion outside, whilst gathering from a neighbour that a body had been found. (Downside to living by a canal…)

Unfortunately, it transpires that the poor soul lost in the woods was a very young man, and that our picturesque doorstep walk is now a murder scene.

So… we don’t feed the ducks today!

We clean and tidy the house, which is nice and removed from the horrors some poor family are experiencing right now… but also irritatingly ironic on the first world problem front. I mean, my home is the cleanest it’s ever been, but nobody outside is allowed in it! Seriously… if a woman dusts her drawers but her mother can’t inspect them… are they really clean?!

School drop off is so much better this week as they’ve finally told all parents to wear masks. I had been feeling very awkward, standing on the outside of a barely distanced huddle, looking like Mrs Paranoia in my jet black face covering, refusing to join in the unmasked gathering of parents from my kids’ classes. It feels so unnatural- especially when I’m used to hosting Church-School events and greeting people at the door! But when you can’t see your family until all of this is through? You can’t help but stay as far away from a crowd as you can get away with!

That said, we do hot foot it straight to ballet on a Tuesday morning now- despite the fact that social distancing there is very much for appearances only! One fun game is to time how long it takes before every mask is tucked under a chin in order to facilitate chatting. But… the Youngest absolutely loves it and I wouldn’t give up our ‘something to do’ for a million quid!

I get a phone call from a single Mum who suffers from extreme anxiety. She has double booked a home appointment with picking up a form from her Doctor and is in a bit of a panic. We have an hour to kill before swimming, so I offer to go and collect the form. Easy peasy, right?

The Doctor surgery is transformed into a flu jab clinic and nobody else is permitted to enter. For collections, one must walk round the back of the building and up three flights of steps, wait outside and ring the right number to speak to a receptionist. I kid you not, we stand outside for thirty minutes calling the number printed on the window and nobody answers. A nurse comes out for someone else and I beg her to check reception for me (as I’m sure she’s not busy enough…). She comes back out and apologises but no one was at the desk. What to do?! The Youngest is so bored she’s now making runs toward the car park, but knowing my friend’s disposition, I really can’t go home empty-handed. I attempt to speak to someone downstairs in flu jab central, but am quickly shown the door.

“There’s only one receptionist- she must have popped to the loo.”

Eventually I get back to the car and decide to Google the surgery. The phone number is different. I call the one on the website and immediately somebody answers. You have got to be kidding me?!

The numbers printed on all of the many posters explaining the convoluted Covid plans are wrong. A tiny mistake, I suppose, that cost forty-five minutes of my time and the attention span of my poor toddler. But just imagine if that friend of mine with the severe anxiety had come in her present state- with both of her toddlers- instead?!

Small things, it seems, can really add up quickly these days. No wonder everyone is on the edge!

No plans. Yesterday we went swimming and it was brilliant. I love watching the little one engage and learn and try new things and have fun! But today, we are back to pottering.

And some of it is brilliant! We play dress ups and superheroes and princesses and dinosaurs. We bake. We play hide and seek and I count to ten and upon shouting ‘ready or not?’ she jumps out and says, ‘found you!’ No matter how many times I try to explain it!

But we also watch alot of Paw Patrol. And she also plays with her toys by herself and doesn’t want or need me to get involved. And so I potter while she plays. Tidy, clean, put stuff away…(for the fourth day?! And my mother still can’t come and stay?!) So I start to fantasize about projects… but I dare not start anything I might actually get fully distracted by. So I just sit down and watch her.

And get a bit sleepy.

So… I call the nursery. I ask if they have any availabilty for one morning a week? They do. (They do?! I thought they wouldn’t!) They offer a trial next week… I say yes on the spot, get excited and then spend the whole afternoon worrying that I should have said no.

Husband’s day off. We are yet to use it for a day out as planned and spend the morning doing jobs. He does the school run and goes out and about, so I mope. He comes home and I am evidently on a downer.

Is the nursery trial an error? (Just see how it goes.)

Is it too selfish?! (She has no playdates, it’ll do her good.)

Am I wishing away the best years of my life?! (It’s three hours a week.)

Am I a terrible mother and therefore human being ?! (We are not talking about this anymore).

He asks how come I got so down so quickly this week?

Due to the rain and you know, the murder, we haven’t gone outside so much.

I fell behind on my Bible in a Year.

I had a few later nights than usual.

Tiny things we had planned, that would have involved interaction with other people, were cancelled.

Tiny, tiny things. Building blocks I put in place to keep my spirits up and my mind clear, were subtly removed. And they all add up quickly!

So we spent the afternoon out. We went for a walk and the Youngest absolutely beamed from ear to ear. I caught up on my Bible reading before he went out. And the difference was visible.

Today is mental health awareness day. My input is… know what your building blocks are and keep them stacked! We are all at a higher risk of crumbling.